After a 2 day mission to get back home from Lavarone (including a 6km, 90minute walk through some Italy back country with Ross and all our gear after 2 trains and 2 buses and a 7 hour stopover in Berlin) I had some time to put some thoughts down about my first ever WOC!

The sprint qualification was held on the small Islands of Burano and Mazzorbo. They offered a picturesque opening to the World Champs, with small alleyways, canal crossings and fast running. My lack of flat road running really came to the forefront of my race, and when I did not qualify I really understood how unfocused I was towards WOC. WOC for me was all about the experience, and getting the feelings that I will have in the years to come. My shape was no where near maximal, and when I started to race I felt like I was seriously struggling. The sprint, for the most part, was easy and predictable. We had obtained a version of the map which someone had made, and Ross and I had planned several courses/legs on this. When I was running my course I felt like I had seen all the route choices before, and I really did not have to stress my technique at all. In saying that, I did make some smaller mistakes but I think that was a consequence of my body struggling to keep up. If I had prepared properly for WOC, with an appropriate taper, then I believe I could have qualified even with these mistakes. On this day, my running speed was simply not high enough.

Following the NZ selection races (Nationals) which I did not attend as I had already arrived in Europe, Chris Forne was selected to run the WOC Long distance. With the current selection process, athletes are required to put their names down well in advance of the competition. This creates the situation that athletes who only might be interested in running, putting their name down and then if they are selected but do not wish to run, pulling out after the team has been selected. I fell into this trap last year, when I was considering running WOC but because of my studies had to stay grounded in NZ. A similar situation happened this year also when Chris Forne realised that he could not partake in the World Championships. No one new who had put their name down to run which races (apart from the selectors), so following Chris’ withdrawl from the team, their was a frantic search by the selectors to find a replacement. I was approached and my response was initially no because of my shape and lack of focus. I said that it would be perhaps better if someone else ran, as I was a little concerned about my shape. I believe Toby and Ross were consulted as well, but they both said no too, for various reasons. Due to the new tiered structure at WOC, it is critical that points are taken from every race, if we are to move up to the second division. The end result, no one was selected, a situation that I never wanted to happen. I realised this and contacted the selectors/ONZ to try rectify the situation, so that I could run the long. For some unknown reason they refused to change their minds and it wasn’t until a few days before the actual race that I got confirmation (by Malcolm entering me himself) that I was running the long.

This was a very a sad situation and I think proves that something is fundamentally wrong in how the high performance/WOC system works in NZ. It is a very ugly situation when we cant meet up as a squad and openly discuss plans due to various reasons, and we are left completely in the dark by the current selection policy. I believe it is in review now, but I think the best step forward is to have a much more open and transparent selection process. All interested athletes should be identified somewhere, and so people can decide which races to focus on. I also think that the WOC manager needs to have significantly more power, and that if team changes need to be made closer to WOC and are agreed upon by the entire team, then he/she has the capacity to do so. WOC athletes invest a significant amount of time and money and it is disappointing and uninspiring when there is no positive support from our supposed selectors. I am not pointing blame here, as I believe the fault lies with the current selection process.

Anyway, enough of a rant about actually being entered in the long, and to the race itself. It was quite a strange feeling turning up to quarantine by myself and having no one to really talk to about the race. This is another complete fuck up with the new division system at WOC. Now that we only have one spot, it makes the forest races at WOC significantly more individual and for me this year I missed the team discussions about terrain, route choices e.tc. Despite this Ross and I helped each other out, I helped him for the middle and he helped me for the long by setting various legs, so that I could start the race with a pretty good picture of the terrain and understanding of how I should orienteer in it. Fortunately the terrain was quite simple, so in terms of technical preparations, a whole lot was not needed. However, as I discovered in my warm up and heading up to the start, the biggest challenge for me during the race was the altitude. I felt almost sick at the top of the map early on in the race and had significant trouble breathing, thereby impacting my running speed and strength. I managed the course, with out too many technical problems, perhaps some smaller mistakes and then a large route choice mistake on the long leg (4th control)  but it was clear that I was just not up to the physical challenge of the WOC long. In the end I was over 32 minutes behind in 52nd place. Disheartened? No! I knew that I would struggle with the race and for me just completing it was a success and gave me a great feeling. It has provided me with an opportunity to gauge the difference to the top guys so that I can start to try reduce the margin. I am just satisfied to have my first WOC forest experience, even if it was extremely tough and left me with absolutely nothing at the end. But then again, even if I was at my very best then I would been in the same state following the race! 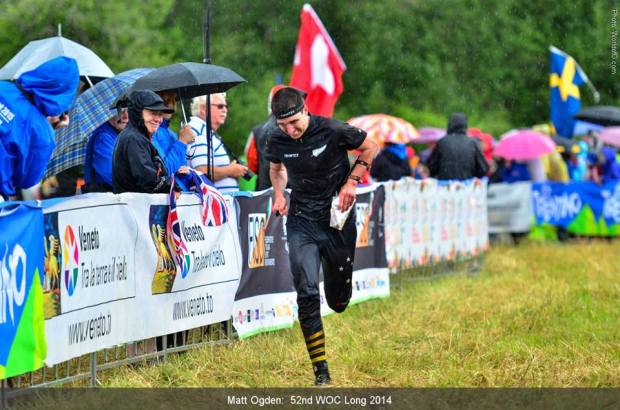 Finish of the long. Tough! WorldofO

The relay was suppose to be our goal as a team, to try secure as many points as we could for next year. It just feels so strange that when we head out into the forest now (at WOC) it is like we have to race for both now and the future. Anyway the team order was decided, Tim, Ross and I. We were quite confident, and if we were all running at our best then I think we could have achieved something great. Tim ran stable on first leg, but his preparations have been mainly in sprint and I dont think he has the forest experience just yet to really realise his true speed under the trees.  Ross was destroyed from the middle and suffered altitude problems like I did. Ross came in with Australia and just behind a small pack. I had nothing from the beginning and dropped behind. This race epitomised my feelings right now. I am just exhausted from all the changes that have happened this year, and racing almost every weekend since I have arrived has left me low on motivation to hurt in a racing situation. I didn’t like the terrain either, mainly because it was so rocky but arguably too I hadn’t even come close to mastering it. At the end of the race, I went straight to the tents and had a bit of a ‘breakdown’, jogging off to gather my thoughts. Similar to what happened in WUOC in 2010 after an appalling relay run there. These ‘fails’ make us stronger, and pave the way for future success!

Shit race at the end of WOC! Attackpoint

So with the conclusion of WOC and a bit of time to reflect I have begun to think how I should approach WOC in the future. I was a little immersed in my own self pity that I didn’t really appreciate how awesome Lizzie did at WOC. I think she has managed 7 top 20’s in the past few years, which is fucken impressive. A tad inspiring for me! WOC is the pinnacle of our sport and that is where we want to achieve. This year I didnt really focus on WOC and my preparations as I have said many a time, were appalling. Next year and forever how long I want to do this, optimal and focused preparations will be paramount. I remember Tom Reynolds once saying, ‘there is nothing like going to an exam feeling as prepared as possible.’ The same is true in racing, if you can have ‘perfect preparations’ then come race day I believe anything is possible. Case in point, Soren Bobach in the sprint in Venice!

I think also if we are to really achieve our potential then the support must increase. Malcom was great during the WOC week, but outside of that there is no support, no high performance communication whatsoever. It is difficult at times to generate all motivation from within and sometimes you just need a few little words to guide you back on the path, but quite frankly we dont have any of that. Just looking at the Suiss, Swedes, Danes…their team environment, their support is so incomprehensibly better than ours which magnifies the differences in our abilities. We are doing this at the Junior level however; full teams, great coaches/managers and look at the results! And now the Australians are doing it too! Anyway, enough of WOC for this year. I have had my first taste, im hungry for another go but for the next month, bring on Oringen and WUOC!